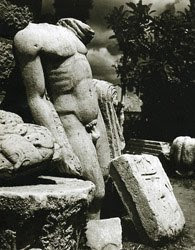 The discovery and preservation of antiquities in nineteenth-century Greece was, according to Vasileios Petrakos in his book on the history of the Archaeological Society at Athens, motivated by a number of objectives:

‘To link the young Greek state and the neo-Hellenes with the Classical Greek antiquity of which they, since they spoke the same tongue and inhabited the same land, were the direct heirs and agents; to defend the young nation and state against those who wished its demise; and to put an end to, or at least to reduce, the destruction of antiquities in liberated Greece by its own inhabitants, be they peasants or smugglers, as well as the foreign archaeophiles and antiques traders.’

Even if it is difficult to imagine a studious body of under-paid civil servants ‘defending the nation’, eager as they may have been to do so (and many certainly were), the passage is revealing as to the ways the Greeks themselves perceive their link to classical antiquity and the political-cum-national role they attribute to archaeology.

What this text also reveals is that – from the very beginning of the modern state – Greek archaeologists undertook the task of constructing Greece as a geographical as well as an ideological topos, a heterotopia in the Foucauldian sense. Creating ‘a space of illusion that exposes every real space’, heterotopias are deployed as systems of institutions, discourses and ideologies in order to act as ‘counter-sites’ on which real sites, active within the particular culture, are colonized by this ‘kind of effectively enacted utopia[s]. Greece has been described as such a Foucauldian heterotopia by Artemis Leontis in her Topographies of Hellenism: ‘a space set apart precisely because it contains classical ruins’, a site expropriated by the colonialist imagination of the West, and eventually recreated, and thus self-colonized, by modern Greek writers, who claim their own (hereditary?) intellectual rights to a magnificent past. Indeed, archaeologists in Greece were inspired by some of the country’s leading intellectuals in their efforts to enhance their nation’s intellectual singularity, based on the promotion of the classical past (the material remains of which had been entrusted to their safekeeping), in the belief that the ruins could bridge the gap between past and present, in a physical as well as a synaesthetic way.

The heterotopia of Hellas, which remains active in modern Greece, and appropriates the country’s realities, strategies and imaginings, has proved to be endowed with the formidable, as Stathis Gourgouris has put it, ‘intertwining of enjoyment and oppression that forms the backbone and the interminable energy-source of nationalism’. Classical ruins, their protection, enhancement, even veneration, and the way Greek archaeology has gone about the recreation of Greek landscape as a way of reappraising the past, came therefore to perform, much more than a visual role (accepting the past as an aesthetic ideal), a fundamentally political one.

Constructing the heterotopia of Hellas was a long process; inspired by Bavarian Neoclassicism, Greek archaeologists worked to ‘purify’ national monuments – meaning strictly those with a classical pedigree – wishing to emphasize the national, emblematic character required by Greeks as the foundation of their national identity. The ‘purification’ campaign started from – where else? – the Athenian Acropolis which had to be restored back to its glory days. The demolition, in 1875, of the Frankish Tower that stood by the Propylaea was one such act of ‘purification’, targeting a monument that was regarded as emblematic of a foreign occupation that had to be shown – like the Roman and the Ottoman – not to have left anything behind that was worthy of note, apart, of course, from those elements which had been ‘rehabilitated’ into Hellenism through a rigorous process of cultural appropriation. Though it met with strong protests from historians the demolition of the monument was emphatically supported by the Archaeological Society who stressed the need to render national monuments ‘pure and unsullied by anything foreign’.

Behind the ideological premise – so dominant in Greek archaeology – of modern Greece’s moral debt to its classical past, lay a much more pragmatic approach: the idea that the country’s landscape, dotted by antique sites and monuments, could be exploited to the state’s economic advantage. The idea that Westerners came to Greece expecting to find the sites in good order had been a preoccupation of Greek archaeology since its early days. As a matter of fact, it was the example of the Grand Tourists and Philhellenes of the previous centuries which had encouraged the Greeks to appreciate the monuments of their land in the first place. Mass tourism, a phenomenon which emerged in Europe and the Western world in general between the wars, was seen by the Greek authorities as a viable way of increasing national revenue.

A first tourist bureau founded in 1914 was succeeded in 1929 by the Greek National Tourism Organization (EOT), a central priority of which became the conservation and enhancement of archaeological sites and monuments for the purpose of attracting and entertaining foreign tourists. In the thirties several sites in Athens and the rest of the country were ‘cleared up’ or ‘made decent’ by removing later buildings (including churches) and manned with tour guides for the sake of tourists. In 1934 Georgios Oikonomos, in his joint capacities as Secretary of the Archaeological Society at Athens and Director of Antiquities at the Ministry of Education, called for the reinforcement of the Archaeological Service in the interest of public finances. He argued: ‘It is fundamentally clear that in our efforts to establish our country as one of the most important destinations for foreign tourism, we are, at least for the time being, obliged to support every aspect of this truly national project of ours relating to the state of our archaeology and our monuments.’

An extensive restoration project was launched, primarily targeting ancient theatres, to serve as venues for the revival of ancient drama. The Herod Atticus Theatre in Athens (an odeion of the Roman period) was being used for such performances – ‘bound to attract the attention and the interest of foreigners’ – long before it was massively reconstructed in the fifties. Soon enough, the Greek Tourism Organization was proposing annual revivals of ancient drama for dollar-paying tourists; and archaeologists, philologists and theatre companies were happy to oblige.

It was thus that the international imagery for Classical Greece was created: researched, ostentatious, and thoroughly modern.

This is part of my introduction to A Singular Antiquity, a volume I co-edited with Dimitris Damaskos earlier this year. Here's a review by Dimitris Papanikolaou and one by Kostis Kourelis (also here for my text).

Here's a clip from the 1968 Greek film Operation Apollo ("Apollo" is the nordic-god-like tourist in the film who is actually a Scandinavian Prince falling in love with the beautiful Greek tourist guide). One of the strongest fantasies of modern Greeks is that their country is visited by Hellenophile, Greek-educated tourists in love with the ruins and (Classical) Greek culture. Funny thing is this fantasy is also shared by many of the tourists themselves, chasing unssuspecting villagers around, yelling incoherent mouzapoloutroponhosmalapola at them...

As for the unreal singing and dancing in the clip (in the "sacred" theatre of Epidaurus nonetheless) I rest my case. More serious stuff in the next post...