Here is the first part of my lecture "Displaying Modernity: Cycladic Art as a 20th c. (Cultural) Phenomenon" which was co-sponsored by the Kelsey Museum of Archaeology and the Modern Greek Program, and delivered at the University of Michigan on October 28 (Greece's National - OXI - Day nonetheless!). I'm grateful to Vasilis Lambropoulos, Artemis Leontis, Laurie Talalay and everybody in Ann Arbor for their warm welcome). 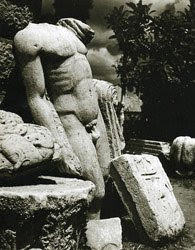 Aesthetics was essential in forging the concepts of the “classical”, the “Greek”, or indeed the “Hellenic”, and Classical art – the glistening torsos, the half-ruined temples, the whimsically coloured vases – became powerful tools in an intensive exercise in cultural symbolism. Besides these, however, the Greek nationalist imagination sought to appropriate other forms of Greek art, not actually Hellenic as such, but powerful enough in order to convey the messages it wished to promote. Furthermore, by extending its hegemony over the art of the Minoans, for example, and the Mycenaeans, or indeed the earlier art of the Cycladic islands, Greece claimed a suitably significant and aesthetically pleasing prelude to its classical self.

My topic is Cycladic art, its appropriation by Greek nationalism and modernist aesthetics at the same time: seen through the filters of the highly romanticized Greek rhetoric in the 20th c., it comes out as thoroughly “Hellenic”, though if we are to believe its modernist enthusiasts, it is anything but. These opposing claims have resulted, I would argue, in Cycladic art’s re-emergence – as a matter of fact in its outright creation – as a full-blown 20th c. cultural phenomenon, both in Greece and the modern world at large.

Cycladic art as an archaeological, historical, as well as an artistic phenomenon, has long now been used as the first milestone in the long and fascinating saga of Greek (Hellenic) Culture, as this has been constructed by the modern Greek state in the last couple of centuries or so. In this continuum, [Cycladic] plays counterpart to [Modern], by standing at the far end of a sequence of arts and ideas, as well as the men who expressed the latter through the former.

The conviction that life speaks through art permeates Greek archaeology, surreptitiously having acquired the status of a self evident truth: 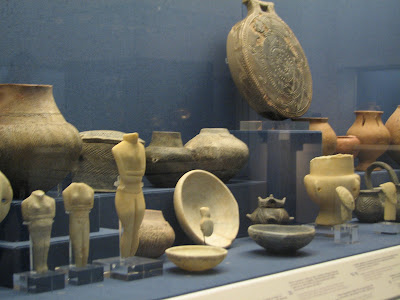 One of the most popular Greek museums, the Benaki, maintains in its most recent guidebook that, starting off with the Prehistoric room (including a small number of Cycladic figurines and other third-millennium artefacts), ‘the visitor will follow, step by step, the historical development of Hellenism as it unfolds through the millennia’. Talking as it does of an ‘exciting journey’ and a ‘true epic’ this idiosyncratic statement offers an eloquent description of the way modern Greece undertakes its own archaeology, as an exercise – often painstaking but ultimately rewarding – in deep soul-searching and courageous self-cognition. 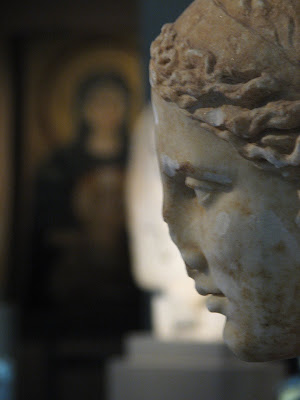 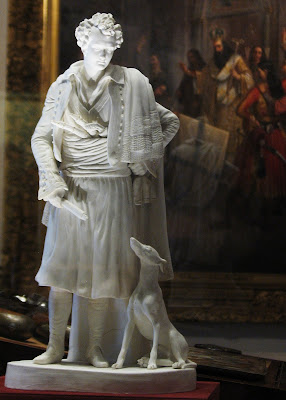 And it is the Benaki Museum, the Hellenic museum par excellence, which – in its own words – strives to illustrate ‘the character of the Greek world through a spectacular historical panorama’, as advertised by its own website. The blurb goes on to specify the time span covered: ‘from antiquity and the age of Roman domination to the medieval Byzantine period, from the fall of Constantinople (1453) and the centuries of Frankish and Ottoman occupation to the outbreak of the struggle for independence in 1821, and from the formation of the modern state of Greece (1830) down to 1922, the year in which the Asia Minor disaster took place’. It is clear from this text that, throughout Greek history, only the contributions of the Hellenes to Greek culture and art are legitimate; all others are conquerors waiting to be charmed by the Greek spirit rather than likely to advance it. 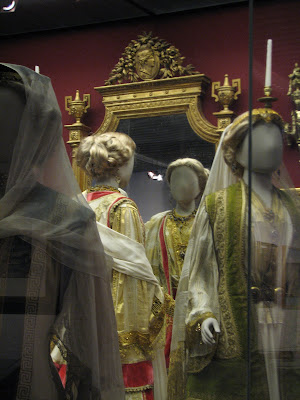 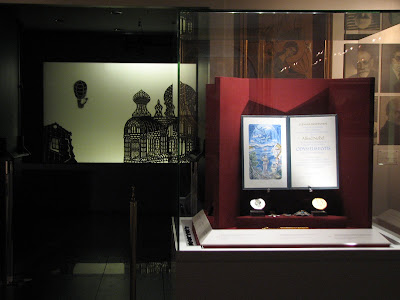 The recently refurbished permanent exhibit at the Benaki Museum spans from Cycladic art to the two Nobel and the one Lenin prize won by Greeks, all for poetry, and ends with a Karagioz screen and figures looming in the background, a spectre, as its Cycladic counterpart, of another culture familiarized by the Greeks through tradition, translation, and inertia. 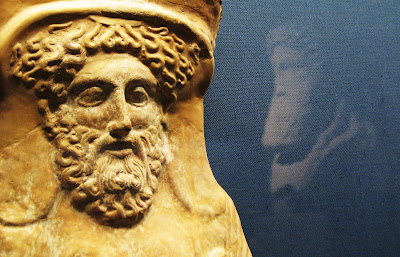