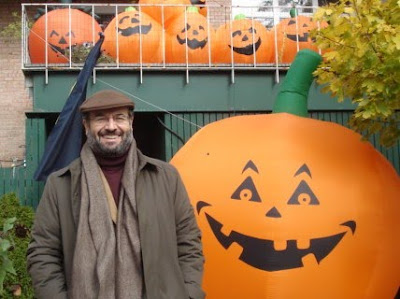 Several months since my last post, I thought I might resume my blogging, after a busy spring semester and an even busier summer (having started a dig up in Argos Orestikon didn’t help much either).

I spent last week in Ann Arbor (while preparations for Halloween were well under way), as a guest of the University of Michigan Modern Greek Program in order to give a paper on “Cycladic Art as a 20th c. Phenomenon”. My lecture, co-hosted by the University’s just re-fitted splendid little Kelsey Museum, discussed – according to the blurb (they call it “blah” over there) – “ways in which Cycladic art has been rehabilitated, re-evaluated and in effect constructed by scholars and museum curators throughout the 20th century, both in and out of Greece, as a truly ‘Hellenic’, ‘European’, and ‘modern’ cultural phenomenon”.

In the next couple of weeks I will post most of my text here – based on some work I published before (mostly here) and on work I might develop further and publish in the future.

Why Cycladic Art? For one, because I’ve spent a few years of my life working in the “world’s greatest small museum”, the Museum of Cycladic Art in Athens, a post that opened my eyes to the power of ancient imagery for modernity, as well as the ways in which the past may be invented through “tradition, translation, and inertia”, as I will be arguing in the posts to come. 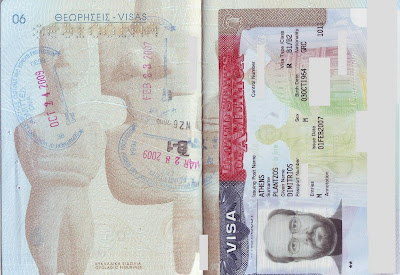 So take a look at pages 6 & 7 of my passport: what’s wrong with this picture?

First and foremost, the fact that a citizen of Greece, a member-state of the European Union since the early 1980s, is still required to apply for a visa in order to visit the United States.

Then that, unlike most other state documents, which tend to look frightfully boring, Greek passports have been vamped up to look like museum catalogues: page after page of images from Greece’s glorious past, complete with legends (“Κυκλαδικά Ειδώλια”, “Αθηναϊκή Τριήρης”, “Παρθενώνας” – or as the case might be Greece’s invented traditions: “Αφή Ολυμπιακής Φλόγας”).

To be fair, the visa document is also well illustrated: the Lincoln memorial (dedicated: 1922), the US Capitol (built between 1793-1829), a few Corinthian columns here and there, and a tiny reference to the “Liberty Bell” (famously used to summon citizens of Philadelphia to a public reading of the Declaration of Independence on July 8, 1776). History illustrated, yes, but these are “American” images, put together to suggest what is so great about the country you are taking such pains in order to gain entry to. In the Greek passport (absurdly designed for foreigners’ eyes even though it is meant to be had by Greeks and Greeks alone) the past is so overwhelming it makes you wonder whether the country is still inhabited.

What is Greek about Cycladic Art? What is Cycladic about Modern Greece? Fear not – I know the answers to these questions, as will be revealed soon enough.

Welcome back then, and read on!