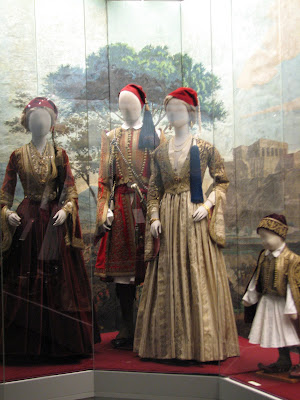 This stress on continuity, from Cycladic to Classical art, and from then on to Byzantium and Modern Greece, has been essential to the construction of Greek national identity in the late nineteenth and throughout the twentieth century, and remains in use with no signs of subsiding. Greek culture (as monitored through its expression in art) and history (as evidenced by its declaration through culture) are emphatically poised to begin in the depths of prehistory and culminate with us, modern Greeks, ambivalent as we might be when we come to face challenges such as the end of modernity, or perceived threats such as globalization.

Clearly, however, Cycladic art was not always readily accepted into the Greek sequence. Cycladic figurines have been known since the 18th century, when they were viewed as obscure artefacts of uncertain significance.

It was only later, by the end of the 19th century, that research undertaken by such pioneers of Aegean Archaeology as Theodore Bent and Christos Tsountas established their true identity (as Cycladic antiquities from the Bronze Age), and date (the 3rd millennium BC). Even then, Cycladic figurines failed to attract the interest of scholars (or collectors for that matter). Until as late as the 1920s or so, antiquity was still viewed through the looking glass of neo-classicism: compared to later Greek art, Cycladic culture seemed primitive, and its art was dismissed as barbaric. New views on art, professed by the artists of the time, and further research, now undertaken on more scientific grounds, established Cycladic Art as a truly remarkable cultural phenomenon, of historical as well as aesthetic value.

What archaeologists term the 'Early Cycladic Culture', flourished on the islands of the Cyclades from about 3200 to 2000 BC. According to archaeological evidence, during the 3rd millennium BC the Cyclades were relatively well populated, organised in small communities. The islanders were good sea-men, and communication between the islands was frequent. The islands' mineral resources allowed to the people of the Cyclades the production of tools and weapons, while the abundance of white, good-quality marble encouraged its wide use for the creation of artefacts and implements of functional or symbolic nature. Among these, the figurines are – to us, today, – by far the most distinctive Cycladic creation because of the great numbers in which they are found, the variety of sizes and types and the significance we may assume they held for their owners.

Although the marble statuettes obviously represent human, mostly female, figures, we may not be certain as to whether they represent mortals or immortals. The figures are nude and, though schematic, are marked by an idiosyncratic realism. The torso is complete, bearing the crucial parts of the human anatomy. An emphasis is often placed on genitalia and facial features, notably a long, triangular nose.

Other examples can opt for a sometimes striking realism. Eventually, then, archaeology helped establish Early Cycladic Culture as one of the main stages in Aegean prehistory. It took, however, a much more circumspect way before Cycladic craft was accepted as “art” in the twentieth century. Specifically, it had to be discovered by some of the leading exponents of the modernist movement in art, such as Pablo Picasso, Constantin Brancusi, Amedeo Modigliani or Henry Moore, who saw in it what they had already found in other “tribal” or “primitive” arts, past and present: it was abstract, lucid, and essential.
What is beautiful about Cycladic art? To the eyes of a 5th-century Athenian, a Cycladic head may have looked absurd. 18th- or 19th-century aesthetes judged them simply “unsightly”, “repulsive”, “appalling”. Our established understanding of the culture that created these artefacts enables us, today, to grasp their importance as material remains of a flourishing civilisation. What attracted Modernists to Cycladic art, however, was not their appreciation of archaeological or anthropological data (and as a matter of fact these have been considerably revised since the days of Picasso and Modigliani).