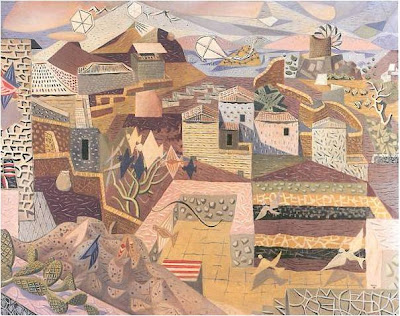 Hellenicity was to be espoused by artists such as the painter Nikos Hatzikyriakos Ghikas who – though his work may look superficially cubist – repeatedly claimed that Hellenic continuity remained his artistic reality: Greek light, landscape (turning every stone into a piece of sculpture), the precedence of light over colour and geometry over contour, proportion and spirituality, all eternal gifts of the land of Greece to its inhabitants. For some critics, Ghika’s work constitutes “a metaphysics of Greek nature”.

Greek modernists had nonetheless been quite successful in establishing connections with the West – mostly the vibrant Parisian circles – through the good services of a number of Greek ex-patriots who were active there. In 1934, Christian Zervos, the Greek émigré who established himself in France in order to become one of the leading art critics of his time, had published his L’Art en Grèce, an eclectic album of photos of Greek artefacts from the third millennium to the fourth century BC, published on the occasion of the IVth International Congress for Modern Architecture, which was organized in Athens in July 1933.

In the book’s polemic introduction, Zervos argues that Greek art is a single phenomenon, spanning from the depths of Aegean prehistory to the present day, and expresses his anger at ‘those historians of art who never showed some sincere affection towards the radiant youthfulness of Greek art’. A loving turn towards this art, he continues, would assure those art historians a grand advantage in view of what he calls ‘their illusions of the library’. In this and his later texts, Zervos is thus channelling into the heart of modernist Paris the angst of his fellow-Greek intellectuals who saw Hellenic prehistory, especially the by then much-admired Cycladic art, being usurped by international modernism as an anti-Classical, thoroughly un-Greek phenomenon. According to Zervos, it was the land itself that generated Greek art, it was the landscape that formulated ‘the Greek spirit’. A Cycladic figurine, he claims, a vase, a bronze artefact from the Geometric period, an Archaic statue, all anticipate those elements essential to the style of the Parthenon. The subsequent publication of L’Art des Cyclades in 1957, dedicated to Christos Tsountas, establishes scientific knowledge regarding the culture and its figurines, which he styled ‘poems in marble’. 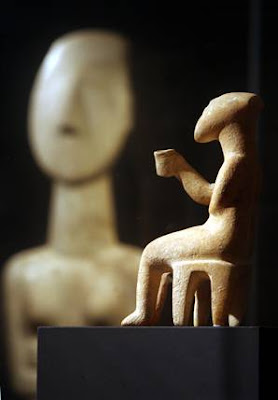 And this is how, as treasured possessions of mankind at large, as splendid “poems in marble” and as the majestic prequel to Classical art, that these artefacts are exhibited today in the Museum of Cycladic Art in Athens, the world’s largest Cycladic collection in private hands. You can watch a virtual tour of the Cycladic Gallery, showing at the Museum’s own website (click on the image above for a link to the page), starting in the depths of time – it would seem – to place the viewer in a sea of calm waters and playful dolphins, and then inside the museum’s ostentatious Cycladic Gallery, where the figurines are shown detached from any archaeological or anthropological context (which at any rate would be admittedly difficult to produce since all artefacts must be assumed to come from illicit excavations), but are, instead, projected against dark backgrounds, imposingly lit, as if beamed down from an extra-terrestrial world dedicated to aesthetic perfection.