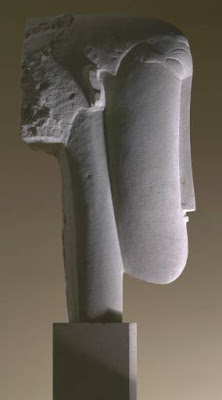 Cycladic art appealed to the modernist desire for the 'primitive', seen of course from a western perspective. The Cycladic figurines portrayed mortal or divine beings of strikingly human form, and well within the human scale (we estimate that the largest among the figurines come pretty close to what at the time must have been life size). They portrayed social functions and attitudes, not specific individuals, but they may have stood en lieu of people, in the same way voodoo-dolls are thought in some cultures to encapsulate a person's 'aura'.

At any rate, Modern artists, who - it should be noted - missed vital information, for example the extent to which colour was part of a figurine's appearance, turned to the abstract form of Cycladic figurines in their effort to create a new means of expression. 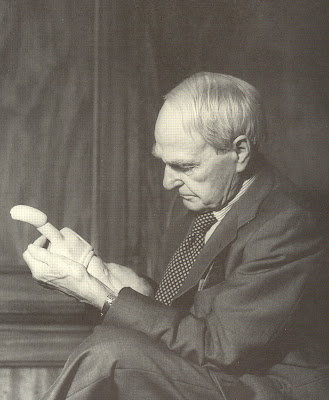 Prehistoric art, as well as 'primitive' art of their time (African, Oceanic, Native American) interested the Modernists, so much so that several frequented Museums or Auction Houses where such artefacts were exhibited or offered for sale; in fact Modigliani, Giacometti and Picasso are known to have owned African works of art, and Moore was famously photographed handling a Cycladic figurine at the British Museum. They took Cycladic sculptors to have mastered natural form through their intellect, thus identifying the essence, not the superficiality of their prototype. The essential was what Modernists sought to express through their art. Though the result of a slight misapprehension, and construed on the basis of a westerner's pre-conceived notions, modernist appreciation of Cycladic art was nevertheless deep, so much so as to become meaningful.

For them – for us – this was (and is) the “new beauty”, to replace the by then conventional, over-abused, and trivialised models of Renaissance art, itself based on the Graeco-Roman tradition (usually taken for solely “Greek”). Centuries of over-abuse had trivialised the Graeco-Roman artistic ideal, which now looked conventional and overtly graphic; Greece had now become ‘the enemy’ (a phrase I am borrowing from Henry Moore). 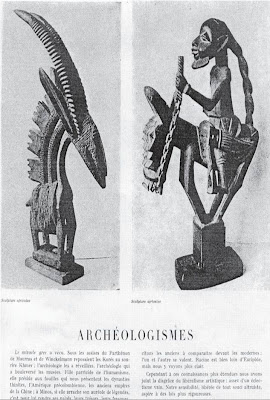 In 1926 the pioneer ethnologist Georges-Henri Rivière had published his polemic archaeologisms, where he celebrated the death of ‘the Greek miracle’; intriguingly, the final blow had been dealt, according to him, by that ‘parricidal daughter of humanism’, archaeology herself. Archaeology, claimed Rivière, had finally woken the korai with Khmer smiles that lay sleeping under the foundations of the Parthenon; excavation had uncovered pre-Pyramid Egypt, pre-Columbian Americas, China’s empires; and he concluded: ‘we have joined to this broader knowledge the disgrace of artistic liberalism: enough of worthless eclecticism!’ This manifesto was political as well as aesthetic; it expressed a frustrated call for a break with tradition, a demand to contemporary culture to change the way it views itself through its perceived past. For those critics and artists Cycladic art was inspiring because it was not Greek – as a matter of fact it stood as a negation of the Greek norm.

In the meantime, Greek intellectuals were striving to establish a new cultural and political identity for a new nation-state, anxious to broadcast what I have called elsewhere its own “singular antiquity”.

Prehistory was, on the other hand, a very different case altogether. Since the last decades of the nineteenth century, archaeology had been uncovering traces of Greece’s prehistoric past, including the cultures that flourished in the Aegean. In the 1870s Heinrich Schliemann had shown that Homer’s Troy was not merely a myth, and proceeded to do the same with Agamemnon’s Mycenae, this time on Greek soil. Greek intellectuals were initially indifferent, if not hostile to Schliemann’s cavalier attitude and enthusiastic conviction that he had “gazed upon the face of Agamemnon”, Mycenaean civilization however was to be attached to the Greek sequence very soon, and so were its Minoan and Aegean counterparts. Following Schliemann’s discoveries, Greek archaeologists set off to investigate Greek history through systematic excavation and thorough publication of finds. Their reaction to widespread orientalist attitudes of the time led to the concept of a timeless ‘Greek spirit’, running across Greek history from the depths of time to the present day, and the notion of Greece being the cradle of European civilization.

So, by the 1930s, when Greek intellectuals were embarking on a self-confessed route to a “new humanism”, Greek nationalist rhetoric had produced a very strong narrative for Greece’s historical and cultural physiognomy: it was based on the nation’s antiquity, its natural and uninterrupted continuity, and above all its very ... Greekness, untouched by time and remaining untainted through the ages. Greek intellectuals in the 1930s regressed easily to hellenocentric radicalism, actually reviving the environmental determinism of the beginning of the century.

It was now somehow becoming obligatory for Greek intellectuals or artists to declare their fascination with the landscapes of Attica, the colours of Greek nature and, above all, the sea. The Aegean becomes at this time – and remains to this day – the new point of reference for the Greek consciousness; it is given primacy of place in poetry, significantly in the works of Odysseus Elytis, whom one of the strongest theorists of this generation, called “a mystic dawn over the Aegean”. A new mythology emerges from the waves of the Aegean and the rocks of its islands, a new Hellenic physiognomy, to be credited with all the precious qualities of a vibrant – and quickly idolized – spirit, usually referred to as Hellenicity.
displaying modernity: i, ii, iii, iv, v, vi, vii.
Αναρτήθηκε από Dimitris Plantzos στις 7:00 π.μ. Δεν υπάρχουν σχόλια: Σύνδεσμοι σε αυτήν την ανάρτηση