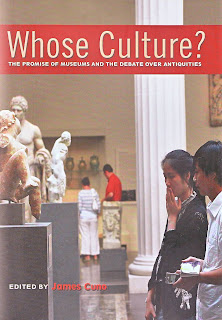 Cultural heritage has increasingly become the focus of fierce controversy and the question “who owns antiquity” a hotly debated one. Here, and elsewhere, I have been dealing with nationalist claims to cultural patrimony (in Greece or elsewhere) trying to argue that these very claims have shaped the world we know – or at least have certainly forged the identities under which we get to know it.

Nationalism is of course a four letter world by the book of “advanced” societies or interested parties, such as those dealing in antiques trade (which, of course, involves looting, and destruction of archaeological sites, designated or not). On the other hand, ethics of study, publication and promotion are a great bone of contention when it comes to illicitly excavated and exported antiquities; international trade of antiquities has become a lucrative business, compared by some to the trade of arms or drugs. As many other such fields of illicit action, dealing in antiques has been involved in entrepreneurial initiatives such as money laundering. It is admittedly a murky business, often entailing – further to the destruction of sites and loss of archaeological contexts – the exploitation of people. As I am quietly contemplating the hypocrisy lurking behind the politically correct frenzy of castigating any scholar or artefact suspect of “contamination” with the un-pure (any artefact not properly provenienced for almost a century) I can’t help noticing that “the other side” have managed to retaliate with some highly hypocritical arguments of their own.

The book Whose Culture? The Promise of Museums and the Debate over Antiquities (ed. J. Cuno, Princeton University Press 2009) appears to be making “the strongest case yet for an internationalist approach to the protection and ownership of ancient cultural heritage, and against its nationalization by modern states on political and ideological grounds”. In fact, it is a blatant attempt to reiterate claims put forward by colonialism, which one would have hoped could be rehearsed only within the confines of university seminars in 2009.

First, I must say I was shocked to find someone like John Boardman in the list of contributors, but then relieved to realise that he is the John Boardman I know – his text, on “archaeologists, collectors, and museums” is elegantly poised on the angle of the archaeologist / researcher who points out (as we all must) that we cannot “punish” antiquities – as tainted products of illicit trade – when we are unable to punish their traders, or better still prevent their illicit excavation altogether. In that he utters harsh, but well-placed words against the philistinism of those who have opted for such a hard-core stance, which they indeed seem to be exploiting politically in the last ten years or so. But this is only a small part of the whole argument, and – regrettably – the book has a lot to “offer”.

The rest of the book is pretty much a dishonourable attempt to convince the reader that “nationalism” is the opposite of “enlightenment” and that in the world of cultural management there are those (nations?) who know how it’s done and “such nations [which] may lack the additional physical (i.e. museums and storage facilities) and human (i.e. professional registrars, curators, and conservators) resources needed to acquire and care for the large quantities of objects held by collectors and dealers.” (Merryman, p. 184-5). I guess the solution in order to redress this horrible inequality would be to colonize (again?) those poor nations with an army of “professional registrars, curators, and conservators”... (If that were to be the fate of my country, I would be happy for the BM to keep the sodded Elgin Marbles; what am I saying? I would take the rest of it back to England myself). Truth of the matter though, Mr Merryman, is that “such nations” have been given the blessing of such an army of “professional registrars, curators, and conservators”, duly serving as the founding fathers of (their) nation as we speak.

As usual, rhetoric is indicative of the book’s intentions: the same Mr Merryman contrasts “Cultural Nationalism” (which he claims to be the source of “nation-oriented policies”) to “Preservation, Truth, Access” (the ideals behind an “object-oriented policy” he champions). I cannot be bothered to comment on the despicable – yet diaphanous – ideological games behind the distinction introduced here (and on chapter-headings nonetheless: pp. 186-7).

Elsewhere, such innocent (or are they?) slips of the tongue are simply funny: as with Mr M.F. Brown who, arguing that the modern museum is far from being a colonialist outpost, contends that “museums [...] played a key role in convincing citizens of the metropole that far-flung peoples possessed admirable qualities – tenacity, creativity, deep histories of self-governance, perhaps even an aesthetic or spiritual genius” (my emphasis). Well, guess what Mr Brown: they can even read!

What emerges as the book’s underlying principle – in fact it is its barely disguised gimmick – is the belief in the “encyclopaedic” museum, vowing to shape “the citizens of the world” (though strictly of the First World, and there only the citizens of a few select cities in it. Ah, and tourists, of course). Long now understood as “spaces of observation and regulation” (by T. Bennett, and others) museums cannot escape their deeply un-humanist agenda despite efforts to change their rhetoric (changing their politics might help, however). But the good authors of Whose Culture would have none of that – the turn towards on extrovert museum would be the end of civilization as they know it (or at least the end of cavalier archaeology, imperialist-born and colonialist-trained, in favour of disciplines such as cultural studies, perhaps, which they of course detest).

I’ll end this with Phlippe de Montebello of the MMA, who argues (again) that it is the object, not the context that matters. For this, he enlists a text from 1870 (the book’s cultural age and place, indeed) on the “encyclopaedic” museum: “true art is cosmopolitan. It knows no country. It knows no age. Homer sang not for the Greeks alone but for all nations, and for all time.” The idea that the past belongs to “us” is as strong today as it was in 1870 (or in 1770 for that matter). Pity that some of us cannot realise the processes under which this collective “we”s have come to be forged. Instead they babble on about “true art” and the “encyclopaedic museum”.