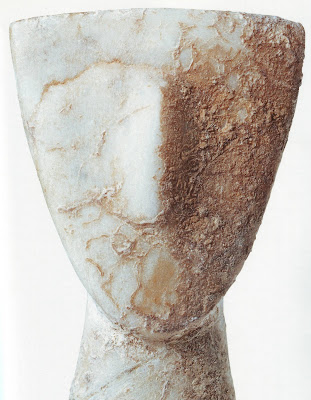 So this is how Cycladic art has today has acquired a Hellenic identity and a modern façade. It has now become familiar to the public and scholars alike, and this seems to have influenced the way it is studied, as part of the Greek continuity discourse. Renfrew’s processualist approach in The Emergence of Civilization (1972) gave way to a freehand assessment of Cycladic art in his Cycladic Spirit (1991), commissioned by the Museum of Cycladic Art, where Cycladic figurines are compared in terms of technique, style, and aesthetic outlook to Archaic korai and Byzantine icons, in apparent agreement with the views of Hellenic continuity presented here (remember how various aspects of the “primitive” had so much pleased modernist aesthetes in the 1920s and 1930s). Renfrew may sincerely believe (as he actually claims) this comparison to be ‘a processual one’, nevertheless it should be pointed out that Cycladic Aegean on the one hand and the Byzantine Empire on the other have very few, if at all, structural or systemic features in common; they are simply both labelled ‘Greek’, and are strategically placed on the same linear sequence – one as the distant forefather of the other. Can ‘art’ exist in a vacuum?

And this even though the Mediterranean of the fourth, third and second millennia BC has produced many other forms of small-scale sculpture, figurines, predominantly female, which might provide a better processual comparandum for their Cycladic counterparts.

Discarding, moreover, the magnifying lens of modernist aesthetics, could we not argue that the persistence of certain types in Cycladic art (some stuck around for five or six hundred years if we are to believe standard typological chronology), far from suggesting a ‘careful adherence’ to some mystic canon or law of proportion surviving over the ages is in fact a symptom of stagnation and insularity?

Our readings of antiquity are open to a multitude of imperceptible notions, a fact that makes our business much more complicated. By accepting Cycladic artefacts as a priori ‘beautiful’, we implicitly recognise the authority of modern aesthetics on the subject; similarly, emphasizing the role of the Aegean as a timeless factor in the creation of Hellenic culture might betray our subconscious exposure to romantic notions of environmental determinism and its racist implications. A touch of aestheticism seems quite appropriate in most cases: as in the straightforward catalogue of the Cycladic antiquities of the Ashmolean Museum in Oxford, subtitled The Captive Spirit. Is this a comment to smuggling and illicit trading of Cycladic antiquities? If so, where is the ‘Free’ Spirit supposed to reside?

Colour, in the form of red and blue pigments added onto the surface of the statuettes and other marble Cycladic artefacts, naturally posed a serious threat to their reading as objects of pristine simplicity and virginal clarity, as their modernist enthusiasts would very much like to view them. Known to archaeology since the days of Tsountas, added pigments were always somewhat ignored in the studies of the figurines. 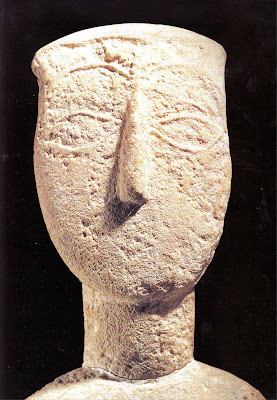 Recently, however, detailed chemical analysis of once painted and now washed-out surfaces has produced considerable results and the promise for a breakthrough in the near future. Even though the general consensus seems to remain that colour was meant to increase the naturalist aspect of the statuettes, by adding facial and other anatomical features or enhancing their lines and contours, while a discussion of pigment-enhancement is virtually absent from many other accounts, some convincingly maintain that the overall impression of a fully-fledged Cycladic figurine would be even more abstract, certainly less naturalistic than what they now look like, having lost their original pigments.

I feel that it is exactly by the negation of this stereotype – simplicity of form, clarity of line and so on – that we may gain a point of entrance into the Cycladic pictorial realm. As many cultural historians have suggested, the way to begin to understand an alien culture is to look for instances where its messages are most opaque, ignoring indications – often misleading – of superficial familiarity. I would think that this type of investigation, employing methodology of related, albeit hitherto ignored by archaeology, disciplines such as Cultural Anthropology and Sociology is bound to be more fruitful. During the most part of the twentieth century archaeologists proceeded to scrutinize Cycladic art in the light of modern science, producing scholarly accounts under different schools of thought: empiricist, functionalist, processualist. A positivist assessment was essential to the hellenocentric narrative (as it provided the necessary element of ‘proof’) as well as the ‘modern-archaeology-as-science’ one, as it legitimized the discourse and confirmed the authority of the scholar undertaking it; inevitably, such discourses tell us more about their authors rather than their supposed subjects. This approach, applying its standard taxonomic devices, excelled in a particular field which I propose to discuss next: the invention of the Cycladic ‘author’ the genius behind the spirit, an import from Classical archaeology, which – despite its lukewarm reception by many of the leading figures in archaeology – seems tempting for many students of Greek prehistory even beyond the Cyclades.

As a modern concept, Cycladic art is in dire need of the artist: the author, the creator-genius to whom we can attribute not only works, but concepts and ideologies as well. Modern art-criticism, starting off some time in the nineteenth century, proceeded to establish ‘the author’ as a central figure to our understanding of art and culture, contemporary or ancient. An anthropocentric reading of the past has thus being developing, based on the study of creations (artefacts, works of art, literature) and their creators. Ostensibly rooted in rationalism, this new approach was emphatically empiricist.

The persistence of connoisseurship in the second half of the century, aided by a general reluctance of historians of ancient art and classical archaeologists to engage in theoretical discussion, threatened to monopolize classical-archaeological studies; more to the point, it was exported to less ‘art-historical’ subjects, such as art or craft produced by provincial workshops in the Greek and the Roman world, or even Prehistoric archaeology which has been subjected to the same art-historical approach. Cycladic art was, of course, the main beneficiary of this trend, which helped shape its ‘modern’ profile – hence the need to discuss this problem here. An emphatic plea in favour of the individual in Greek prehistory was made by Christine Morris in 1993, strongly – though not quite convincingly – arguing that personal styles are discernible in prehistoric arts, based on art-historical observations. Earlier, [in 1977 and 1987], an American scholar (Pat Getz-Preziosi) had proposed a similar approach to the study of Early Cycladic sculpture (including the rather less diagnostic collared jars nicknamed Kandilas!), an arrangement accepted by many, including Renfrew, who also spoke of ‘Masters’ in prehistoric Aegean. 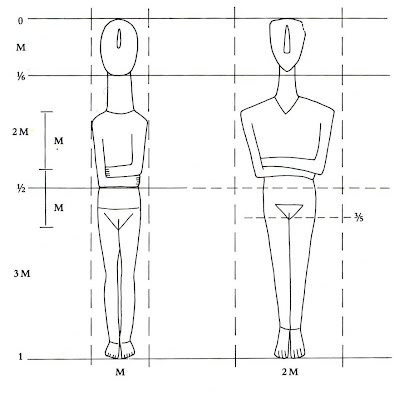 This, seemingly systematic study of what are perceived as ‘individual hands’ in Early Cycladic sculpture, based on measurements and stylistic peculiarities diagnosed on the statuettes themselves, to be attributed to their sculptors’ individual idiosyncrasies is continued to the present day (blatantly ignoring, at its demise, the risks imposed by the possibility of fakes among the largely unprovenanced pieces it “classifies”). Although connoisseurship in Cycladic art has been criticised by many, and in various degrees of severity, two main arguments seem so far to have been employed: one sees the whole approach as a ploy on behalf of the international art market in an effort to enhance ‘artistic’ significance of the surfacing pieces (all, by definition, products of illicit digging, and thus permanently lost to their archaeological context) and, as a result, to multiply their monetary value. Needless to say, international market practices afford a great support to this accusation, since such attributions to ‘masters’ and ‘workshops’, presented in auction catalogues as a matter of fact in most cases, are routinely treated as part of the piece’s ‘history’, and used to justify the ridiculously high estimates quoted. These critics thus insist that artistic merit (in any way we might define it) ought to be eliminated from this equation.

Another, rather more moderate, line of thought questions the ‘feasibility’ of attribution studies, and places a strong emphasis on the subjective character of stylistic analysis, preventing the scholar from exercising archaeology as an ‘objective episteme’. This rather instinctive reaction to a tremendously popular scholarly exercise betrays a somewhat narrow-minded, empiricist reluctance to accept somebody else’s equally empiricist findings. Some dismiss aesthetic appreciation of Cycladic sculpture as a trope of contemporary ‘sensibilities’, and are of course right to do so, they even miss, however, the essential modernity of this very project. Many archaeologists seem to believe that ‘the archaeology of the islands’ is cleanly detached from the discourses of experience – be that ancient, modern, or post-modern. Aesthetic appreciation was the raison d’être behind the invention of Cycladic Culture, and the stylistic approach is not a mere trope in Cycladic studies; through both its attractive potential and its grave shortcomings, it expresses the wish, inherent in modern scholarship, for the imposition of control and order over vast quantities of ‘silent’ material. The desire to establish an overall rational ethos, in its Weberian sense, is evident in archaeology’s claims to ‘scientific objectivity’: coherence, consistency, and effectiveness have long been identified as the ambitions of modern episteme, in an effort to establish long, linear, and assuring historical narratives that ‘make sense’.
displaying modernity: i, ii, iii, iv, v, vi, vii.
Αναρτήθηκε από Dimitris Plantzos στις 7:00 π.μ.